USES FOR THE INDUSTRIAL VIBRATORS FOR STORAGE HOPPERS

During the industrial production process, there is often a need for storing products using vibratory hoppers powered by electromagnetic vibrators. These elements are used in all industrial sectors, including automotive, food, pharmaceutical, cosmetic or mechanical sectors, among others.

WHAT EXACTLY ARE THE VIBRATORY STORAGE HOPPERS?

In feeding systems, the vibratory hopper, also called Autonomy Unit, is located above the vibratory bowl feeder and its incorporation is advisable in many applications because it is the autonomy element that allows to store the parts and doses them to the vibratory bowl feeder. It also ensures the presence of parts in the bowl, if the latter does not have sufficient capacity of its own in order to house the amount of parts equivalent to the desired autonomy time. In some applications, it is actually essential due to the type of product to feed, particularly in so far as the weight of the load.

DIMENSIONS AND FEATURES OF VIBRATORY HOPPERS

HOW TO CHOOSE A VIBRATING HOPPER?

The choice of a hopper model depends on several factors inherent to the parts.  On the one hand, based on the type, dimensions and weight of the parts to be transported and, on the other hand, based on the autonomy time or storage capacity required by the client.

TYPES OF VIBRATORY UNITS THAT YOU WILL FIND IN TAD

The design of the hopper must allow for its loading in conditions which will not harm the parts it should contain and ensure a regular and smooth dispensing of these parts, based on the action of gravity, preferably, without the possibility of wedging by pressure.

The positioning of the parts above the upper level of the vibratory feeder bowl penalizes its incorporation in cases in which the regulations of the companies are governed by ergonomics, given that their normal height for refilling is 1,400 mm. In this case, it is advisable to incorporate an elevator-conveyor that will carry out the same function but with loading at a lower level.

TAD vibratory hoppers are robust and reliable, with high spec finishes, and the parts in contact with the pieces are made using construction materials suitable for the pharmaceutical and food industries. We use our own and third-party cookies for technical, personalization, analytical purposes, and to show you personalized advertising to a profile made from your browsing habits (for example, pages visited).Click HERE for more information about the Cookies. You can accept all cookies by pressing the "Accept" button or configure or reject their use by pressing the "Settings" button. 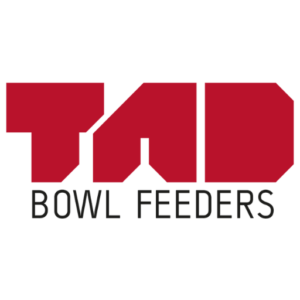 This website uses cookies so that we can provide you with the best possible user experience. Cookie information is stored in your browser and performs functions such as recognising you when you return to our site or helping our team understand which parts of the site you find most interesting and useful.

If you disable this cookie we will not be able to save your preferences. This means that each time you visit this website you will have to enable or disable cookies again.

This website uses Google Analytics to collect anonymous information such as the number of visitors to the site, or the most popular pages.